Warning: "continue" targeting switch is equivalent to "break". Did you mean to use "continue 2"? in /nfs/c03/h06/mnt/47997/domains/jeffschram.com/html/wp-content/plugins/types/embedded/includes/wpml.php on line 624

Warning: "continue" targeting switch is equivalent to "break". Did you mean to use "continue 2"? in /nfs/c03/h06/mnt/47997/domains/jeffschram.com/html/wp-content/plugins/types/embedded/includes/wpml.php on line 641
 Thought dump on Ex Machina | Jeff Schram

Warning: count(): Parameter must be an array or an object that implements Countable in /nfs/c03/h06/mnt/47997/domains/jeffschram.com/html/wp-content/plugins/workbox-video-from-vimeo-youtube-plugin/workbox_video.php on line 192 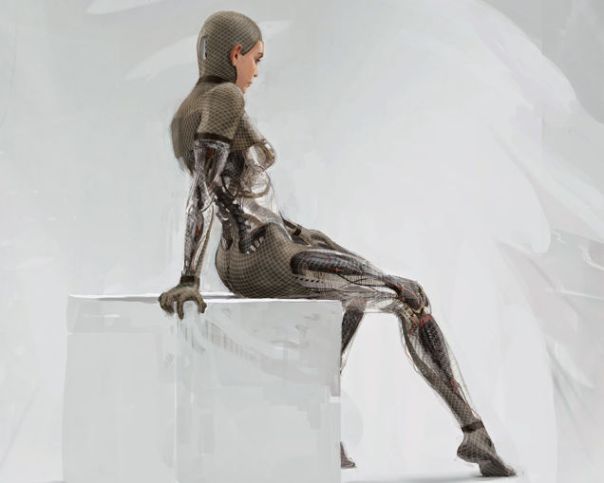 If you haven’t seen the movie, don’t read this post – imma spoil it for you. But really, anyone who reads this blog probably knows me personally, and has heard me gushing over it for days. So.. spoiler alert?

What is he testing? Not exactly ‘what’ but ‘who’. Sexy Robot, that’s who. Rich guy has created an AI, housed inside a robot named Ava. And it’s the job of not-rich guy to interact with her and do the Turing Test; if he can’t tell whether he’s speaking to a computer or person, Ava passes the test. And then I guess Rich guy can go back home to his normal life in Bushwick. If you have all the money in the world, would you choose to live in a remote palace with sexy robots? (maybe?).

Not-rich says “Why did you make her obviously a robot? I can see the gears and shit under her sexy transparent legs”. Rich says “Isn’t that really the test? You already know she’s a robot – but can you really tell me she’s not self-aware? Conscious?”

Inevitably – the sexy robot flirts with the guy and convinces him to help her escape. And he does (because Rich told Not-Rich that she has artificial sex organs, so if they want to get it on – they technically can.)

Ava ends up killing Rich, puts on some skin so she looks human, and plays Not-Rich – she locks him in the compound to rot and die a horrible death of starvation and loneliness while she escapes out into the wilderness and somehow convinces the helicopter pilot that it’s perfectly normal to be taking a young girl out of the compound (that he didn’t bring there) instead of the dude he did bring there.

Now – if you’ve seen the movie, you know this is an accurate recount of the events. And I’d like to ask you a few questions…

Not-Rich has no family, no girlfriend, and was chosen because of this. If I was him, it’d be a no-brainer. She’s a totally sexy robot. I have no ethical issues in this area – do you? Am I crazy? I think this will be a normal interaction in the future, possibly in our lifetime, why not be a pioneer?

If you were Rich – wouldn’t you have built in some kind of off-switch on Ava? Like a remote controlled off-switch? The previous sexy robots went nuts and got all violent. If you’re such a genius – wouldn’t you build that in?

Along the lines of batteries – what’s Ava going to do to recharge out in the real world? Is that going to be Ex Machina 2? Is she going to kidnap a bunch of people, hook them up to a circuit and suck their energy juice? Shit – is this actually a prequel to The Matrix?

Why are we building AIs? I’ve never heard of any animal in the food chain deliberately creating another animal that could be its superior. Apparently we’re the only animal smart enough to do something so stupid.

I walked out of the theater in a daze. For all my tomfoolery in this post, it’s a gorgeous, smart, thrilling movie. I washed my hands in the bathroom – running my hands under the automatic faucet and turned to get a paper towel from the automatic paper towel dispenser. It failed. I actually felt a bit relieved.